One day recently, I took a bonsai off the shelf that was in desperate need of weeding, like the rest of the pots on that shelf. As I was engrossed in the task, I noticed something that was really strange. They were cone shaped and some of them had opened to reveal a whole lot of little black seeds that fell out of the cone, if not removed carefully. It was only after a lot of detective work we identified it as the Grey-egg Bird’s Nest Fungus found in my bonsai.

What was even stranger to me, was that no other pots in the entire nursery had these little “weeds”. So, out came the camera, and a whole lot of photographs were taken for the record, (look carefully around the base of the tree and in between the roots) 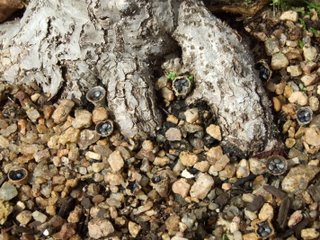 After showing these little “weeds” to everyone who visited the nursery, hoping that someone knew what they might be, no one had seen anything like it.

I then decided to send the pictures off to our indigenous fundi here in Natal – Geoff Nichols, who had also not seen anything like it, and after quite a bit of research no headway had been made, so the pictures were then sent off to an expert on fungi for identification as it was a guess that they might be a type of Fungi.

While waiting for a reply, I kept removing these “weeds” as and when they came up, just in case I had some strange infestation starting in my nursery.

Eventually, Geoff said he needed a bigger picture, which was duly sent off to him. Finally, I received a reply, and was told that the strange ´weed´ was possibly the “Grey-egg Birds Nest” fungus!!! I was also informed that they are harmless, and feed on decaying plant material.

Investigating further, I found some more information on WhatSpecies.com a collaborative site that records the rich species biodiversity on our planet. In a post by Liz Popich she records the following observation:

Small, Cup-like shape with grey-brown or silvery-brown “eggs” inside, eggs bounce out of cup by falling raindrops.

The scientific name of the Grey-egg Bird’s Nest Fungus is Cyathus olla. Another common name is the Gladde Voëlnesswam, and is classified in the category of Fungi & Lichens.

In her posting, Liz Popich noted her observation occurred on March 2014 in Pretoria, confirming its occurrence beyond Kwa-Zulu Natal.

The Grey-egg Bird’s Nest Fungus found in my bonsai were really quite quaint, and am now quite sorry I got rid of every one!

We use cookies on our website to give you the most relevant experience by remembering your preferences and repeat visits. By clicking “Accept All”, you consent to the use of ALL the cookies. However, you may visit "Cookie Settings" to provide a controlled consent.
Cookie SettingsAccept All
Manage consent

This website uses cookies to improve your experience while you navigate through the website. Out of these, the cookies that are categorized as necessary are stored on your browser as they are essential for the working of basic functionalities of the website. We also use third-party cookies that help us analyze and understand how you use this website. These cookies will be stored in your browser only with your consent. You also have the option to opt-out of these cookies. But opting out of some of these cookies may affect your browsing experience.
Necessary Always Enabled

Performance cookies are used to understand and analyze the key performance indexes of the website which helps in delivering a better user experience for the visitors.

Analytical cookies are used to understand how visitors interact with the website. These cookies help provide information on metrics the number of visitors, bounce rate, traffic source, etc.

Advertisement cookies are used to provide visitors with relevant ads and marketing campaigns. These cookies track visitors across websites and collect information to provide customized ads.

Other uncategorized cookies are those that are being analyzed and have not been classified into a category as yet.